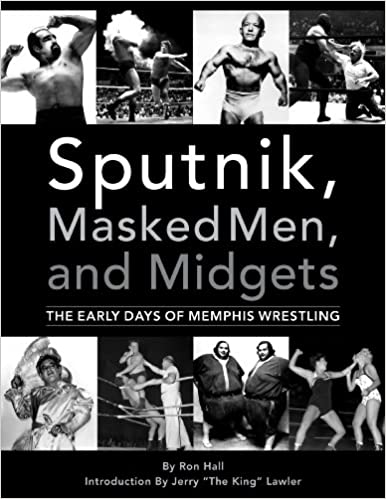 Sputnik, Masked Men, & Midgets: The Early Days of Memphis Wrestling features approximately 400 images from 1950s until the heyday of the late 1970s of Memphis wrestling.

Before cable tv destroyed regional wrestling scenes, Memphis had one of the most active, popular, & lucrative wrestling enterprises anywhere. Ron Hall captures the emotion of the ring; the wild looks of the chiseled wrestlers, the baby faces, the heels, the masked men (and women!), the wrestling bears, the women of wrestling, and the midget wrestlers; and everything else in between this amazing, no-holds-barred world of wrestling.

With an introduction by Jerry Lawler, a bonus cd of songs long out of print by wrestlers like Sputnik Monroe, Jackie Fargo, Len Rossi, and Handsome Jimmy Valiant, as well as reproductions of old wrestling posters and 45s, Sputnik, Masked Men, and Midgets: The Early Days of Memphis Wrestling has something for every wrestling fan out there. This beautiful coffee table book is the coolest book published on Memphis wrestling ever!